It never ceases to amaze me how fast someone can make a $45,000 car turn into a total pile of shit.

I got to work pretty early yesterday morning, a little before 7am . . . I like to get to the shop early.  It’s quiet and I can get a lot done before the phones start ringing and the cars start coming in.  I was greeted by this little number sitting dead smack in front of the gate, a 1998 BMW 528i, or e39 in BMW lingo, and I already know it’s a total pile of crap. 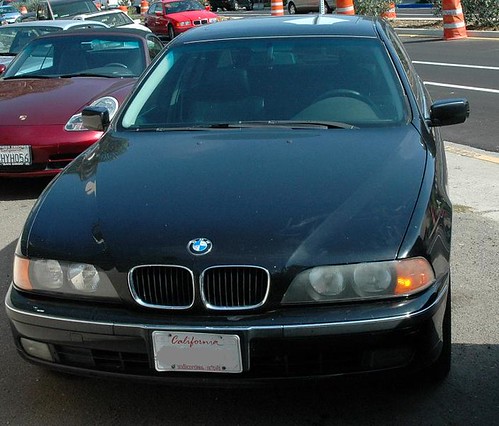 I find the hidden key, of course with no note, and of course with a dead battery. My morning isn’t starting so hot.  So first things first, let’s charge the battery, which is in the trunk. That’s when things get better as I’m greeted with another sign of car abuse — keeping tons of stuff in the trunk, awesome! 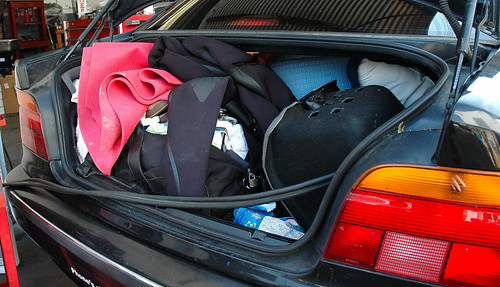 This is a huge pet peeve of mechanics across the country.  Don’t do this; your trunk is not public storage, it’s for luggage and golf clubs and groceries.  If you are using your trunk as a closet, make sure that you clean it out before you take it to the shop.  I look at this picture again, and I wonder if they even know what’s in there.

Time to move on to the passenger compartment, keep in mind I still have no clue why this this poor car is here . . . 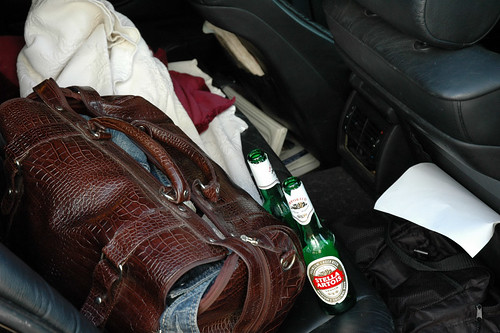 This is actually the first time I’ve seen a guitar and a fan in the front seat together, and apparently there was a pretty decent party going on the the back as I cleaned out a bunch of empty beer bottles. If you ever get pulled over by the local authorities and have a guitar and a fan riding shotgun and a bunch of empty beers in the back seat, don’t expect to get off with a warning.

I open the hood of this fine example of a BMW, and things are getting worse.  The car suffered a failed water pump, one of the cooling system components, which happens all the time if not addressed through preventative maintenance.  Unfortunately, once the engine belt comes off the water pump, it becomes a destructive whip; in this case it destroyed the power steering hoses and most of the belt pullys. 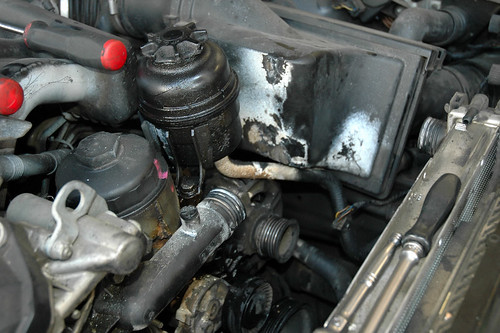 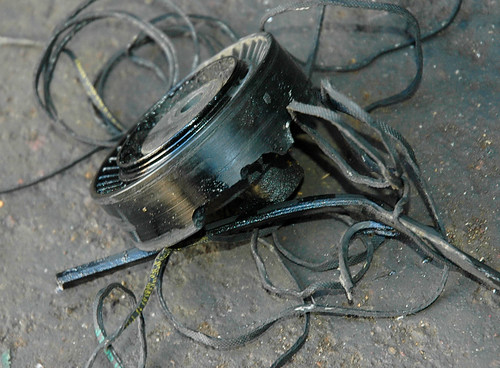 This car has seen what I call ‘Bad Hands.’   I can tell that the ‘mechanic’ who has worked on it in the past has no business whatsoever working on a BMW.  There are cheap hose-clamps everywhere and all of the service items are marked with yellow and pink markers; a sign that the car has been going to “10-minute Quickie Lube.”

When I go to change the oil I find that “Mr. Quickie” has damaged the drain plug by using the wrong wrench on it and over-tightening it for good measure.  So the drain plug snaps off and I have to fish it out.

At this point I pretty much want to toss the car in the Pacific as it would make a better artificial reef than a daily driver.  I finish the oil change, fill the car with coolant, and start her up . . .

If you start your car, it smells sweet, and the exhaust looks like it does in the winter, but it’s over 80 degrees outside, you’ve got a major problem.  Despite all the redeeming qualities of this car, it is now burning coolant as the cylinder head most likely has a major crack in it.  At this point the engine is basically toast.

If this owner had stuck to a decent maintenance program and brought the car to a service center that knows BMWs, he’d have a pretty nice car.  Instead, he now has a $45,000 car that needs about another $4500 worth of work, and in its present condition is probably worth about $450.

On a side note, if you must put a bumper sticker on something, stick it on your mini-van or pick-up truck, not on your BMW.  If you’ve got one on there now and want to take it off, use a blow dryer on high heat to get the sticker warm before trying to peel it off.